Google Hangouts is one of the favorite free services for group work. Its users can create text chats and have video calls with multiple counterparts. There is an additional option of sharing screens which also helps this chat service to become a perfect tool for online conferences and webinars. Being one of the Google's products, Hangouts is tied to one account — the Gmail account, thus, the service is available to all Google users.

Group text chats and video conferences in Google Hangouts can be created and run in any of the versions of this product — there are mobile apps for Android and iOS, the main web version working in the browser and a separate plugin for the Chrome browser which can substitute the traditional desktop application. In this article, we are going to deal with how to configure text chats and video calls for several participants and define how many users can be in those conversations.

Text chats created in this service have a limit for the numbers of users: one chat can include up to 150 participants. The members can be added to the conversation manually or join the chat from their side via the custom group link.

The product can be accessed in several ways:

In the web interface click “+” for “New conversation”. There you can create either personal or group chat. 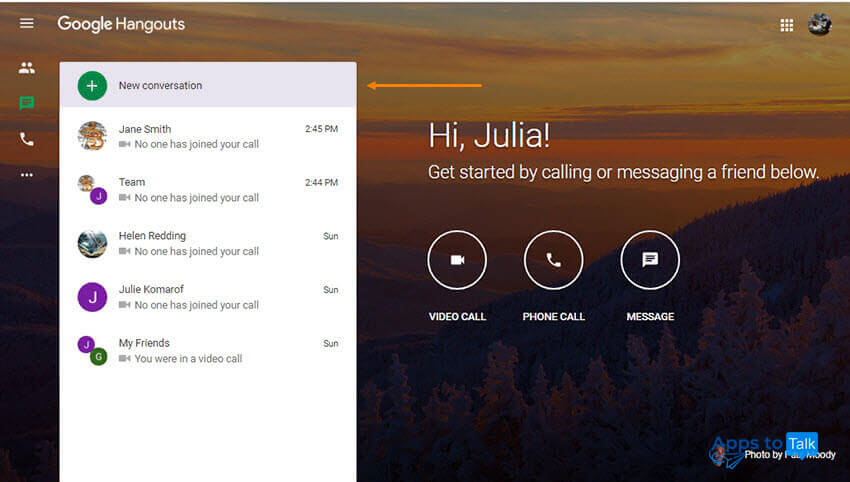 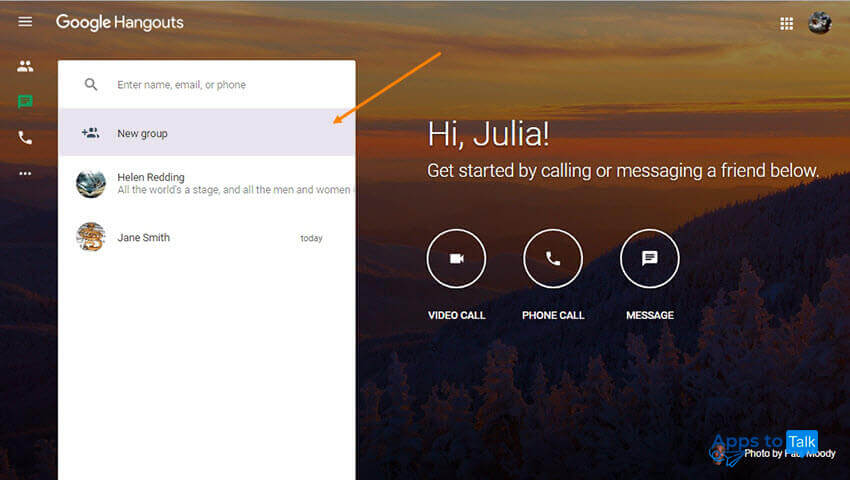 After the group chat is created, you can edit its members:

There is a possibility to turn a personal chat into the group.

People can also join your conversation with someone via the special link:

Any participant can also leave the group from the user's side: either use the menu in the main list of conversations or click the cogwheel icon in the chat window to open the options and choose to leave the conversation. 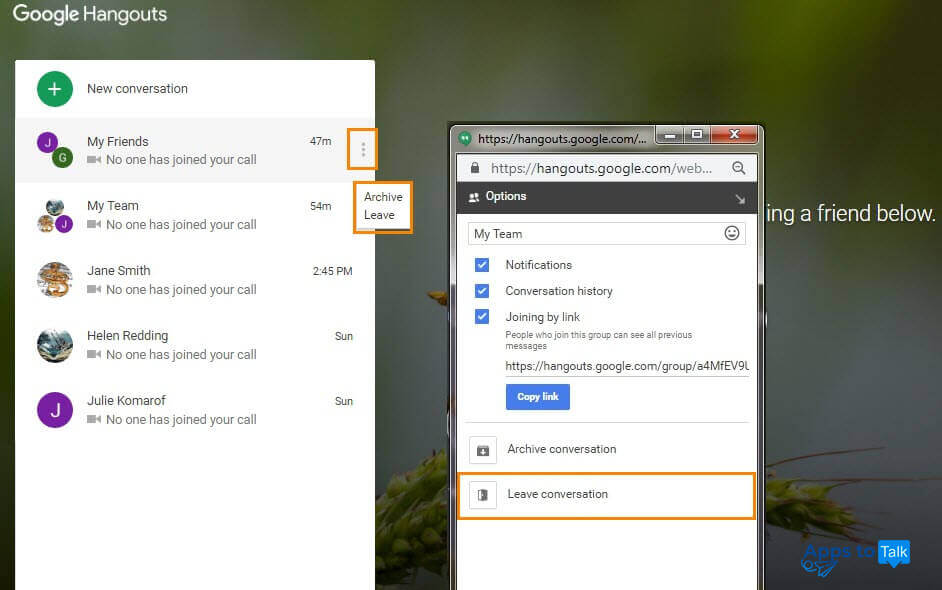 How to create a group chat using the Google Hangouts extension

The Hangouts extension is the plugin for the Chrome browser. It is available for free in the Google Web Store, and after adding it to the browser, it can work independently – there will be a separate icon in the system tray, and it is not even needed to launch the Google Chrome browser to use the Hangouts service on PC or laptops. This plugin will launch a new application window with a look very close to the standard desktop applications.

The interface of this app is similar to the one of the web version, however, there are some differences in menus and icons. The setup procedure of the multi-user chat is the same as in the web version: click “New conversation”, then “New group”, give it a name and add participants. 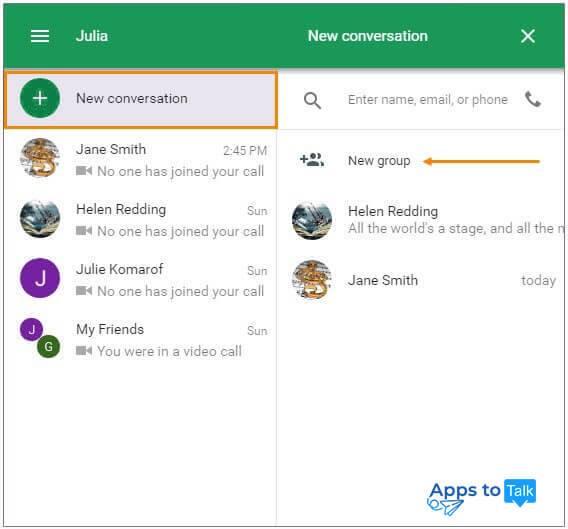 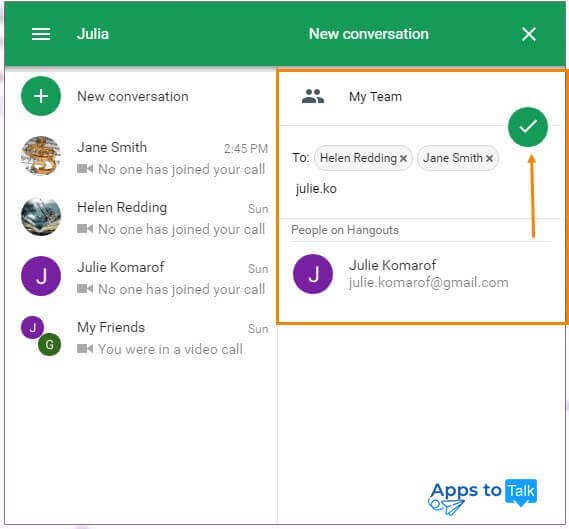 To change the entry list, go to the main menu of that text chat (the three-dots icon) and choose “People”. 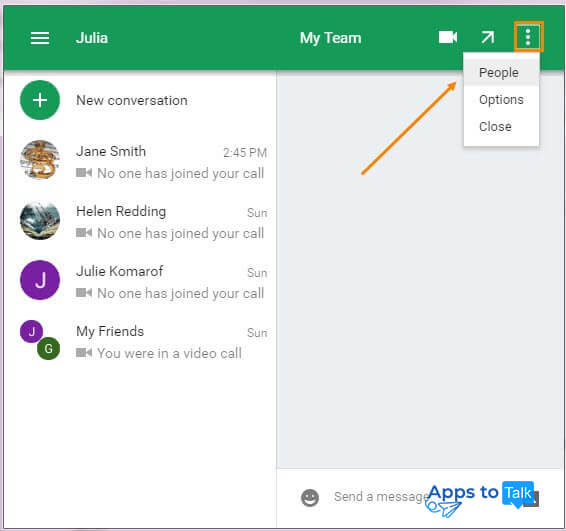 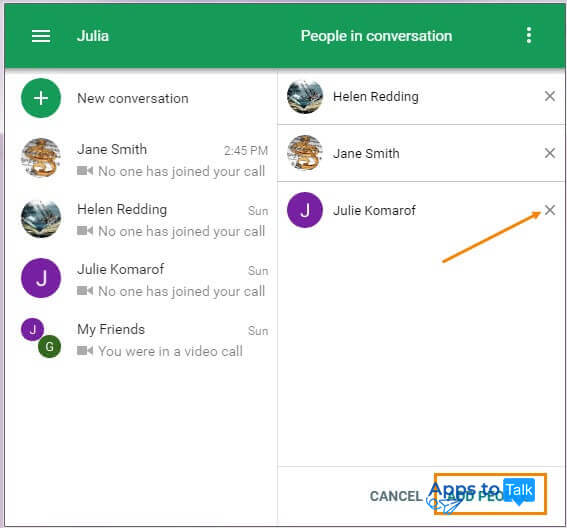 Also you can include more users into the ongoing personal chats: the necessary option is available in the menu: 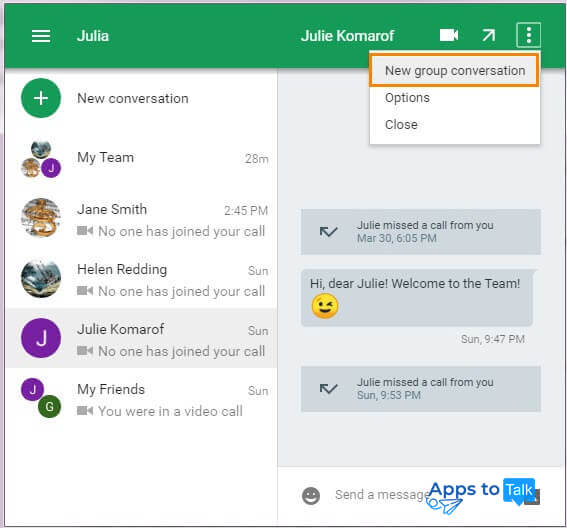 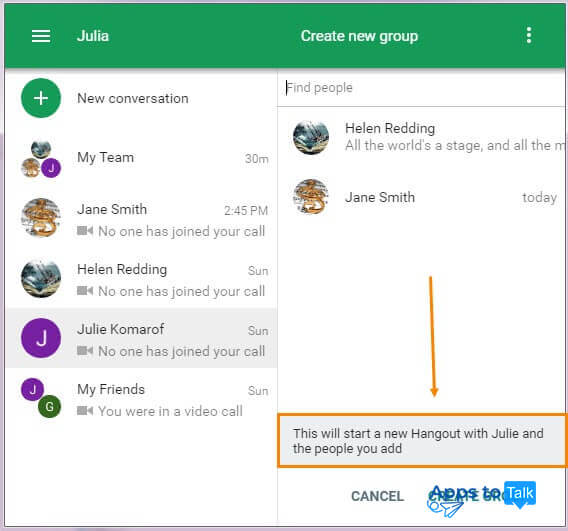 To remove yourself from that team chat, select “Options” in the same menu. 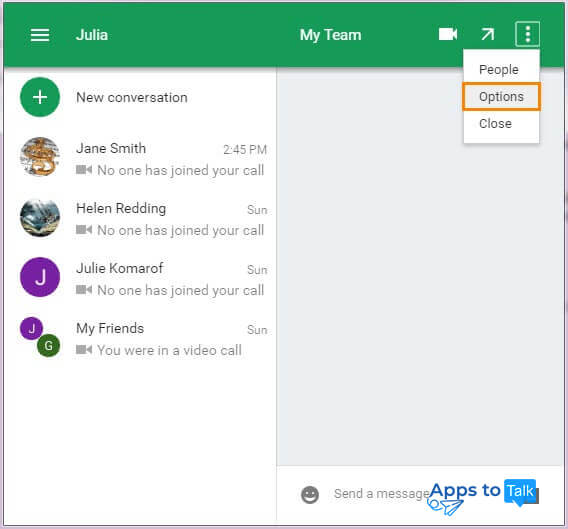 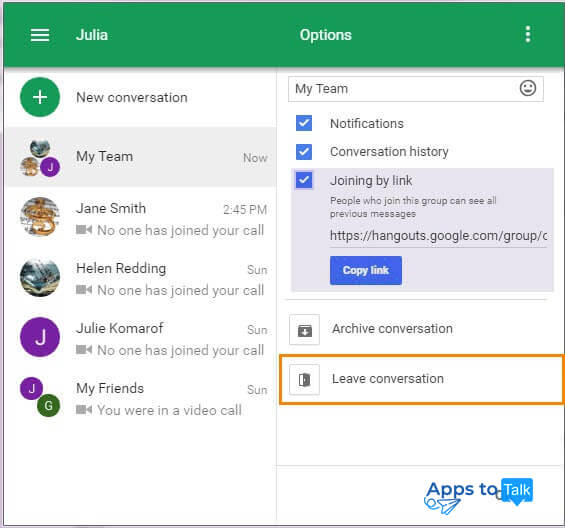 As you can see on the previous illustration, the plugin version can also generate the joining link.

A group text chat in Hangouts

You can create a text chat for multiple members in both the Android and iOS apps. Their interface is slightly different, but the procedure is the same.

On iPhone the path will be slightly different: first you’ll need to choose the “People” section and then it will offer you to create a group with the current counterpart: 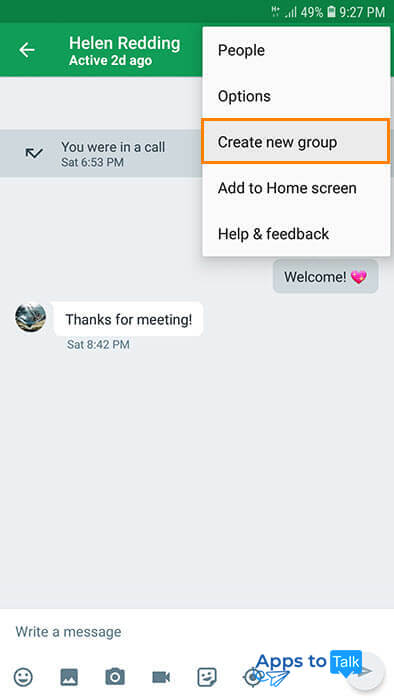 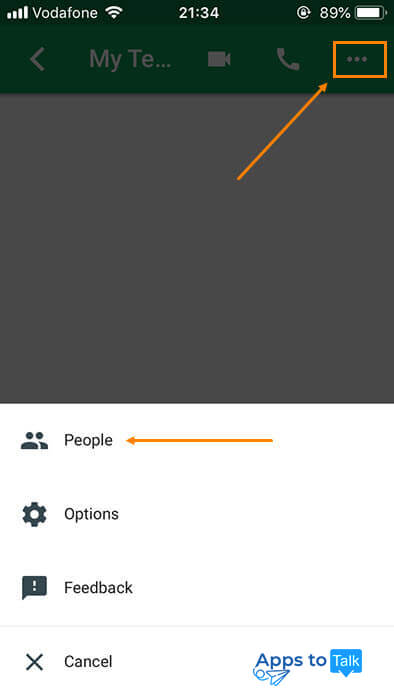 And also the “People” section offers settings for you to add new members or remove some of them. 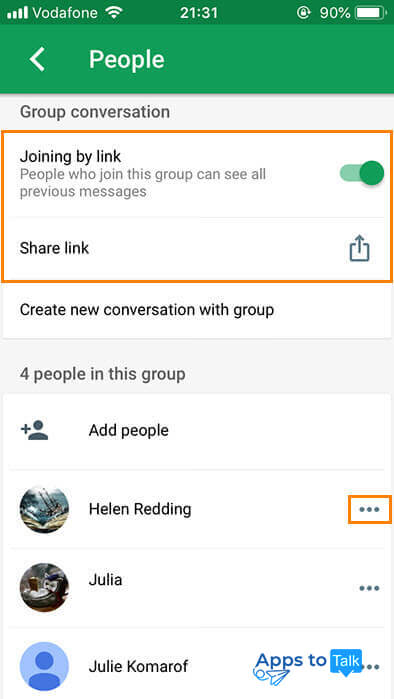 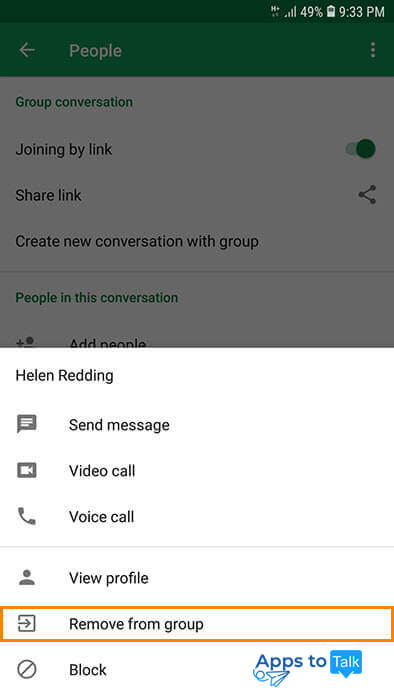 So, this is how to configure group text chats in different versions of Google Hangouts.

As it has been already mentioned, one of the main advantages of the product is the option of video calls between the Hangouts users. These calls are free of charge and do not have any time limits. They can be face-to-face or have the form of conferences with the max users’ number of 25. The quality of audio and video connection will depend on the Internet connection: the better connection you have, the better picture you will receive.

There are two ways of making conference calls in any of the Hangouts apps:

The step-by-step guide will be similar for all versions and apps, there are differences in the interfaces which will be described further. Before starting to configure the video conference in Hangouts, check the system requirements.

The browser version and the desktop plugin of the service are, perhaps, the most suitable solution for the Hangouts video conference, as there you can use resources of PC, laptops and large screens to run several video chats at the same time. Also, calls include video by default, though, of course, you can disable the camera if needed. Still, the service supposes that users will need to see each other when they choose to make a call.

To set up the video conference calls from scratch, first create the group chat. Note that the limit for how many users one can communicate with in video chats are different, they will depend on the service plan (G Suite) in use.

For the Gmail or G Suite Basic users, the video conference can be run for up to 10 members. The owners of G Suite Business and G Suite Enterprise packages can communicate simultaneously with 25 participants.

In any case, any Hangouts user can communicate with 10 counterparts at the same time.

When you gather the participants for the multi-user video calls in the web version or in the desktop plugin (the process is described above), open the chat and click the camera icon. 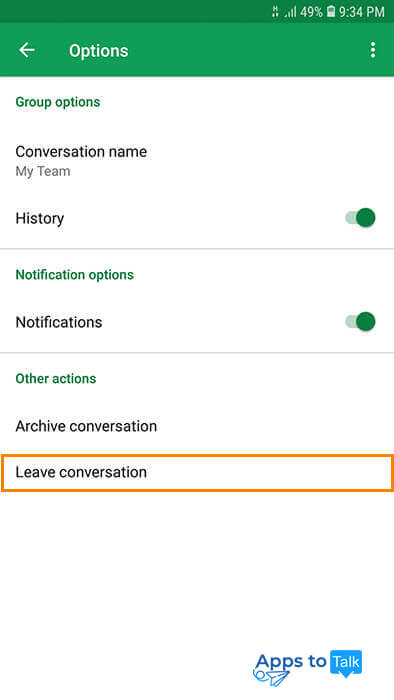 Pay attention to the additional options available for this web chat — they are presented in the menu: 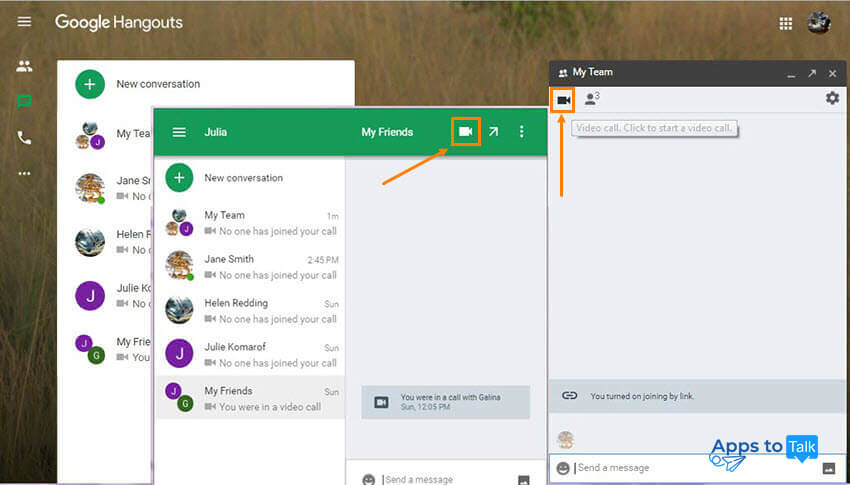 You can enable text comments for those conference calls in Google Hangouts and exchange some data or links during the video communication. 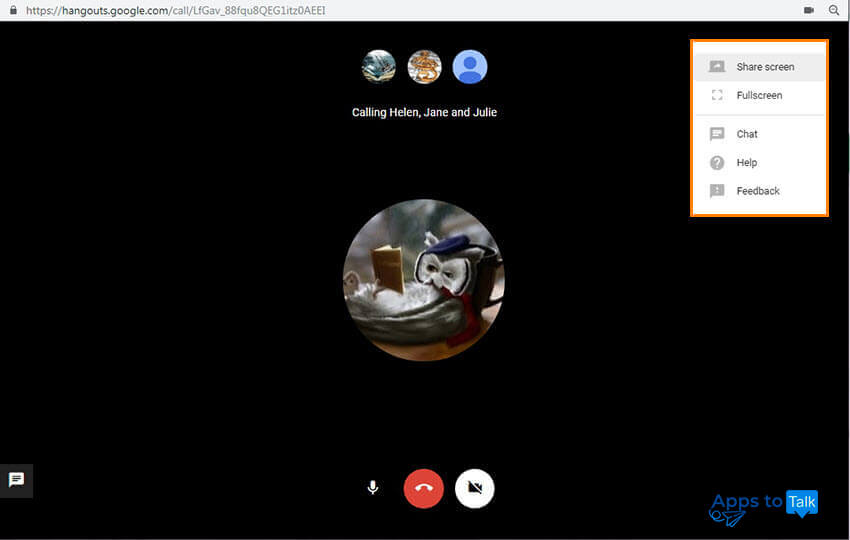 To invite new people to the ongoing video call, click the people icon in the call window. 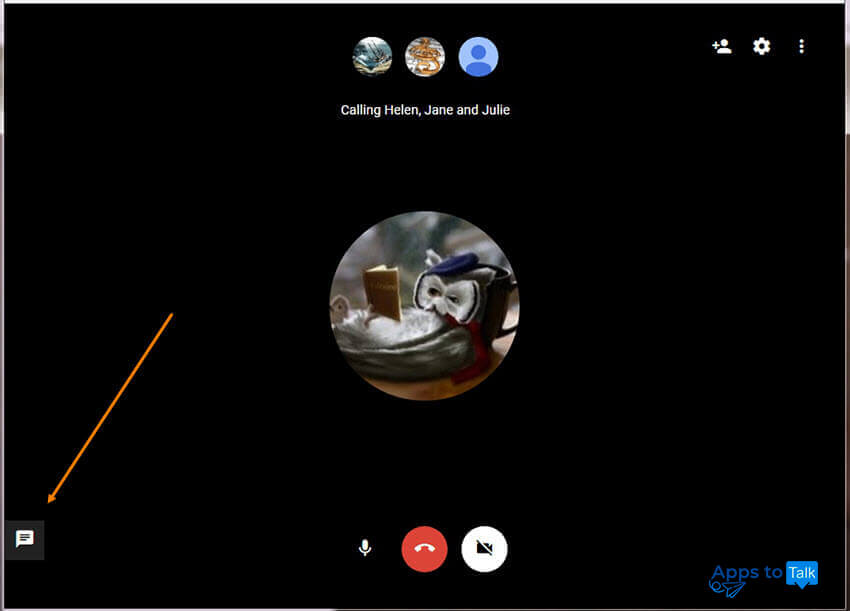 You can either send a direct invitation to join you to a definite person or generate a group link.

After receiving your link, new participants will be able to join your from their side. Of course, new members can join until the limit for the numbers of users in this conference is reached.

How to launch group calls in Hangouts on Android and iPhone

The smartphones and tablets might not be the best tools for video calls with many counterparts due to the limitations of the screen resolution and the power of the devices. Thus, there is a possibility of choosing between having such calls with voice support only or with video as well. Every owner of the mobile device with the Hangouts application can participate in a real-time video conference.

To setu up conference calls in Google Hangouts from the phone or tablet, open the mobile app on the device and create a group chat for those contacts you want to call as described in the instruction for making multi-users text chats.

Open the chat in the Hangouts app and tap the handset icon. The audio call to all members will start at once. 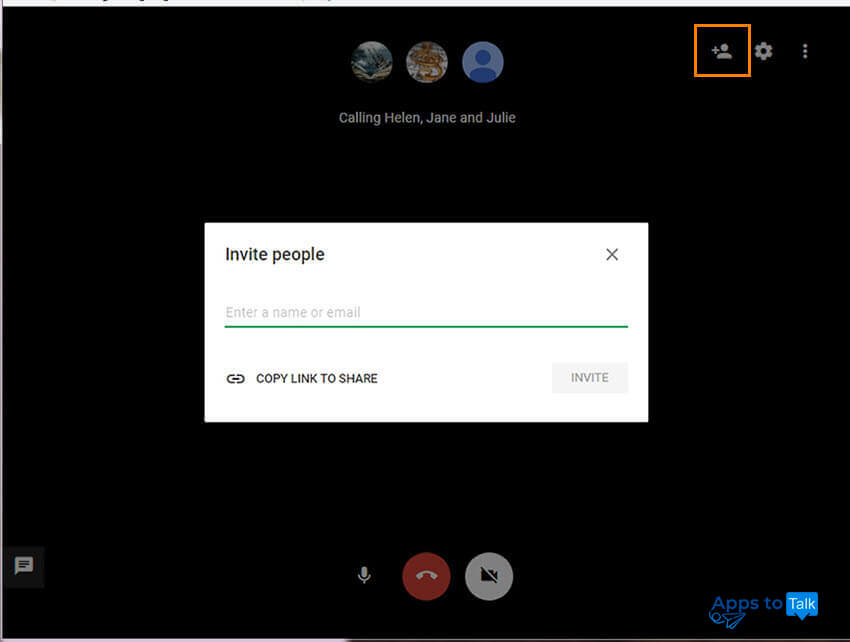 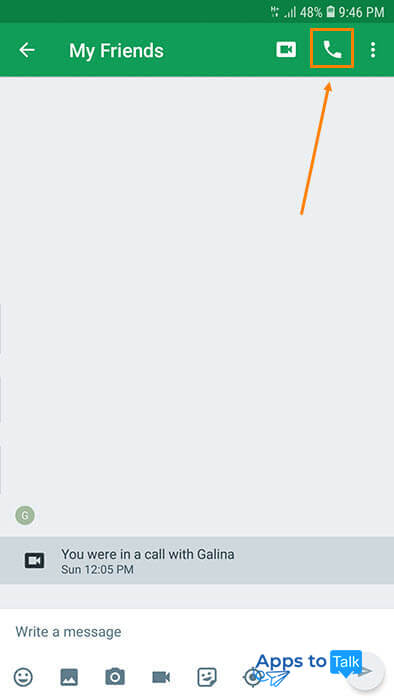 Note that the option to send text messages in the call window is not available in the mobile app of Hangouts, you can use it on the desktop.

If you want to launch the video call with several counterparts, tap the camera icon in the chat window, and then the connection will include the video stream (you can disable the picture if you need). 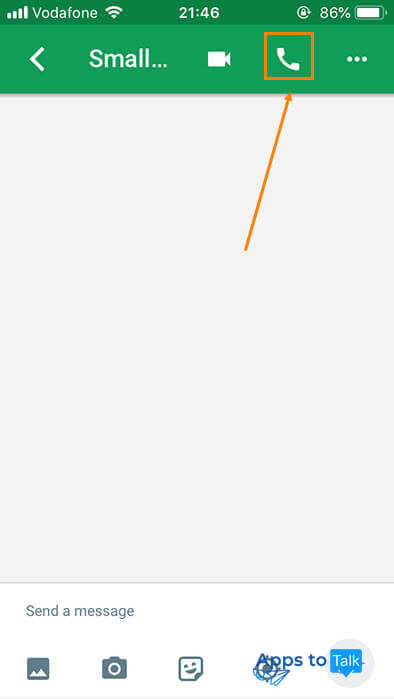 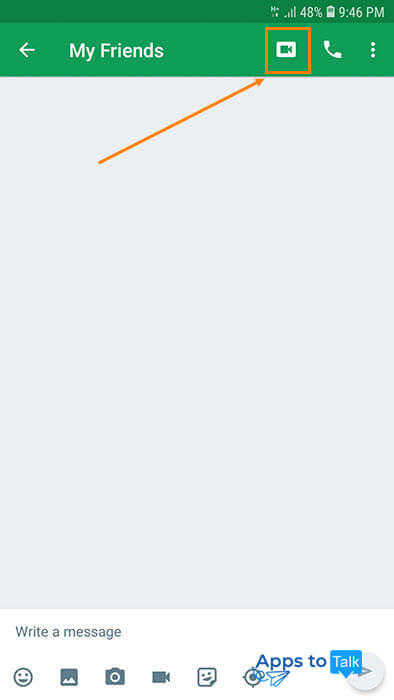 You can invite more people to the existing conference from the call window: 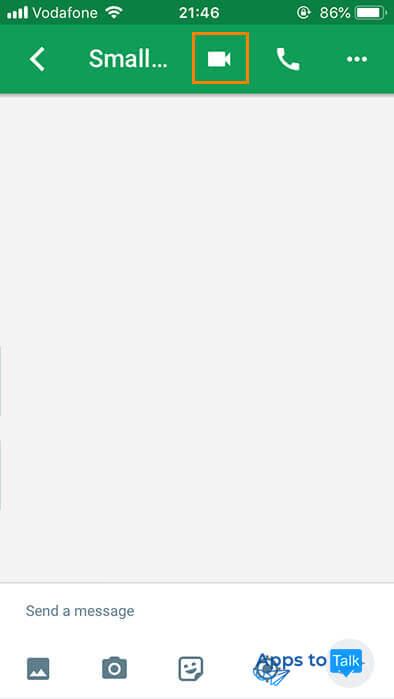 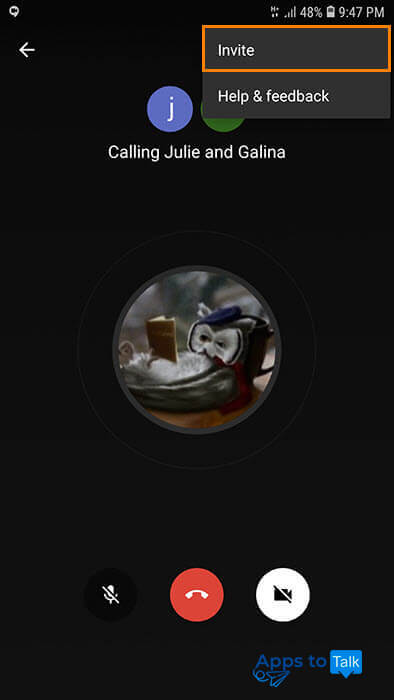 After this, all people who receive the link can participate in the video conference.

Group text chats and conference calls with video support in Google Hangouts are convenient tools for managing team work. The service itself is free of charge and provides means to use it on any device. Besides, it does not require additional registration, being available to any Google user directly from the Gmail interface in any browser. You can chat in real time with voice and also see each other on video.